NEW STAMP COLLECTIONS, ACCUMULATIONS AND RARITIES AVAILABLE TO BID FOR EACH WEEK IN OUR STAMP AUCTIONS

Sandafayre hold stamp auctions and philatelic sales every week of the year. We always have stamp collections, accumulations, rare stamps, album fillers, cancellations, errors, postmarks and postal history for sale at all times.

Whatever topics you are interested in and whichever countries you collect, there are always new lots and something different for you to find in our weekly stamp auctions! Sandafayre sells stamps to keen stamp collectors, philatelic experts, stamp dealers and anyone new to stamp collecting. All our stamps are sold with '100% satisfaction or your money back' guarantee to give you complete piece of mind and reassurance.

We have at least two sales open for bidding at all times. These are updated every Tuesday, so be sure to check regularly.

AUCTIONS OPEN NOW: click on a catalogue to view or bid. 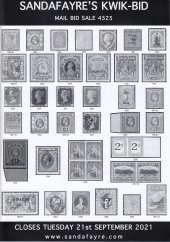 Highlights from our 4325 auction include: 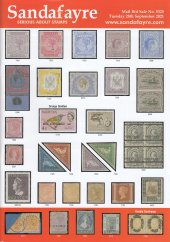 Highlights from our 5325 auction include:

Plus hundreds of Commonwealth lots, Great Britain lots, European lots – All countries in the world from Aden to Zululand! There are also some great sorter lots and collections.

Please enter your email address below, we will send you a notification email when the sale is available to view online.

A few of our favourite lots from this week's auction.