The Stamps and Postal History of Jamaica

Jamaica Stamps – The first stamps to be used in Jamaica were British stamps postmarked at Kingston in 1858. In 1859 British stamps were circulated to a further 50 different Post Offices and cancelled by postmark numbers from “A27” to “A78”. Finding GB stamps from the 1855-57 ‘no corner letters’ issue cancelled at these Post Offices is a considerable challenge. This is because the current Stanley Gibbons catalogue lists 185 stamp / postmark combinations and few complete collections of these have ever been formed. The first Jamaica stamps were issued on 23rd November 1860, printed by De La Rue of London, the elegant stamps have a Pineapple watermark. This first issue has inverted watermark varieties known on each of the 6 different values alongside different shades and also a bisected 1d to be used as a ½d stamp. The most well-known variety on this issue is the 1s values showing “$” for “S” in “Shilling”. Unusually these Queen Victoria designs were in constant use throughout the 19th Century and were last issued between 1904–11. Many would say the highpoint of Jamaican stamp design was reached with the 1919–21 KGV Pictorials and the 1938–52 KGVI Pictorials which beautifully illustrate life on the island.

The rarest is a printer’s error, the 1920 1s orange-yellow with central Statue of Queen Victoria INVERTED, mint examples selling for over £20,000 each. An even more valuable stamp was prepared for use but not issued, the 1921 6d Abolition of Slavery (SG 90) of which only one exists. Fascinating postal history, wonderful readable postmarks, rarities, errors, plate flaws and most importantly of all beautiful stamp designs combine to make Jamaica a collector’s favourite. 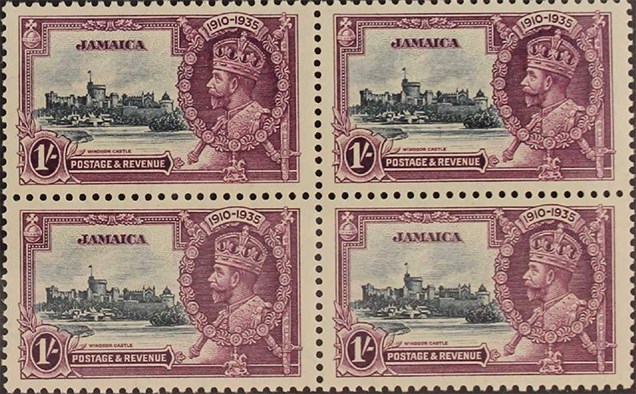