The Stamps and Postal History of South Africa

The first South Africa stamps were issued on 4th November 1910, in addition was the first to depict King George V. This is because the authorities in Britain could not agree a new portrait design with their stamp-collecting monarch! The Union of South Africa was made from combining several provinces. Therefore, strictly speaking the first stamps were from the Cape of Good Hope, Natal, Orange River Colony and Transvaal as they were still valid for postage. In addition, they were used (apart from the aforementioned 2½d value) until the introduction of South Africa’s first definitive stamp series in 1913. The period between the founding of the Union on 1st June 1910 and the 31st August 1913 is known by philatelists as “The Interprovincial Period” as clear, correctly dated postmarks allow stamp collectors and postal historians to collect the stamps from one province used in another province.

From 1926–1951 most stamps were issued in bi-lingual pairs to appease Afrikaan and Colonial sensibilities. They are generally collected and worth more in horizontal rather than vertical pairs. This is traced back to an early printed album which used this format for its page layouts. Vertical pairs are worth between a tenth to one third of a horizontal pair, in addition single stamps even less. We warn collectors against expertly re-joined pairs, expensive items should be purchased from reputable sources. This fascinating area of philately has benefitted from generations of expert research. Many constant varieties have been identified and also sought after by collectors.

The rarest include a number of missing, doubled or inverted frames or centres, the most expensive being the 1933 3d blue with centre omitted. The Republic of South Africa continues to utilise her outstanding cultural and natural resources to issue beautiful stamps. 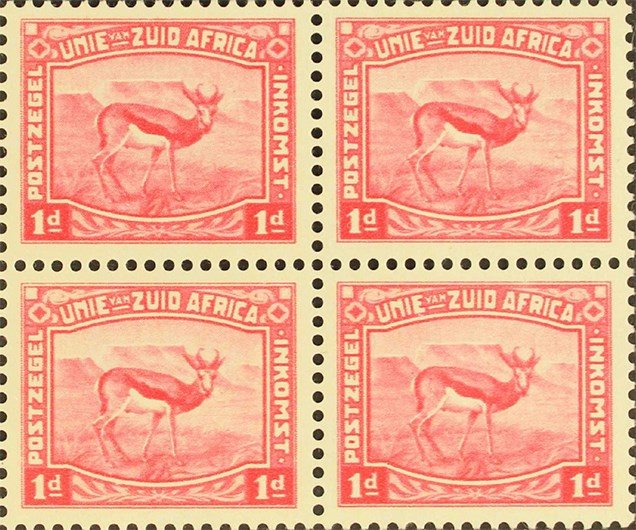