Ireland stamps – Until 1922, Ireland used British stamps and postal stationery, therefore, the first stamp used was the 1840 Penny Black. Numerical cancellations of a design specific to Ireland were introduced in 1844, but otherwise the postal markings followed the normal pattern of the British provincial Post Offices. The difficulty of controlling Ireland continued unabated during the Victorian and also Edwardian eras. The demand for Home Rule increased during this period leading to open revolution in 1916. Nevertheless, the postal service was maintained and British stamps continued to be used, normal British postmark types used and British pillar boxes erected in Irish towns.

A national parliament was established at the end of 1918 and affirmed independent status in January 1919. No adhesives were issued at this period, though some propaganda labels were produced. The Irish Free State was formed following elections in 1921. In 1925 the boundary between Ireland and Ulster (Northern Ireland) was settled. A supply of British stamps printed by Harrisons (low values) or Bradbury Wilkinson (2s6d, 5s and 10s) were overprinted in Ireland by Dollard Limited or Alex Thom & Co. In addition, a small number were also overprinted in England by Harrisons. The first unoverprinted stamp issue began to appear on 6th December 1922. A definitive series depicting the “Sword of Light”, a map of Ireland, the Arms of Ireland and also a Celtic Cross. The first Ireland stamp Commemorative issue was the 1929 Catholic Emancipation set featuring Daniel O’Connell. 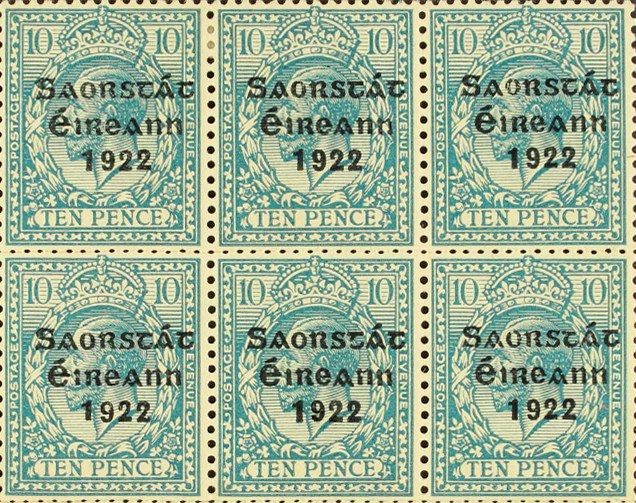